by AARONBOYD on August 13, 2014 in Uncategorised 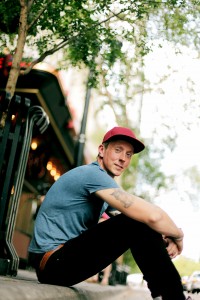 When a band of church musicians finds itself lying flat in the back of a fish truck, smuggled across a dry river bed and into Burma—one of the most dangerous places in the world for Christians these days—you know it’s not about playing another gig.

A few days later, having been protected by an unlikely militant ally, Bluetree played for four hours straight, live in front of 15,000 refugees in Mae La, a refugee camp on the border of Burma and Thailand. The only band to ever play there.

Clearly, for the band best known for its song “God Of This City,” written spontaneously while ministering in Thailand’s red light district, it’s never been a ‘music for music’s sake’ proposition.

Leading worship around the world since 2005, the trajectory of Bluetree’s ministry made a dramatic shift in 2008 after their experience in Thailand.

They went back home to Belfast, Northern Ireland, cleared their touring schedule, plugged back into local church, and began to reconnect to the big-picture meaning of ‘avodah’ (Hebrew for ‘worship and work’). They began to reconsider the boundaries of what is and can be worship.

Bluetree’s founder and primary songwriter Aaron Boyd explains: “We went back home asking, ‘How does this all work? Whose responsibility is it to see these girls released from prostitution and transformed…because if I just pray over the city and nothing happens, then it’s God’s fault, right?’ It’s very easy to push that over on God, but Scripture tells us to go into the world and love people.”

Set for release in August 2014, Worship & Justice fleshes out in music the ‘avodah’ (worship and work) perspective Bluetree has gained from leaning in to hear the heart of God.

“Worship is justice. The two are inextricable, really,” Aaron says. “We can’t do it all—end world hunger, end poverty, stop human trafficking—but what’s the bigger plan? What can we do?”

As much as it sounds revolutionary, Aaron says it really isn’t. “I think the church finally understands that our entire lives are an act of worship in the Kingdom of God. When we sing on Sunday mornings, that’s an expression, but when we go to work, when we go to school, when we are smuggled into a country to go and encourage the underground church, or minister to prostitutes—that is all an act of worship, individual to God. We carry it everywhere we go…. Understanding that when we love God and we love our neighbor, we understand that worship is justice.”

Toward that end, Bluetree—who through partnership with Integrity Music—continues to focus on corporate worship songs that awaken the spirit of worship in action, songs that speak of new life in Christ and the impact that should have on those yet to find it.

Songs like “My Redeemer Lives,” “New Creation,” and “It Is Finished,” are passionate reminders of the permanence and power of God’s grace in our lives.

Aaron takes issue with the oft-used Christian adage, ‘I’m just a sinner saved by grace.’ “No. We are the righteousness of Christ. In the middle of your deepest darkest moments, you are still righteous. When God looks at us, he sees Jesus… As sons and daughters in the kingdom of God, we fall into grace not out of grace.”

From on songs from “Each Day” and “God, You Are Good” to “Jesus Healer,” Worship & Justice is personally and spiritually significant to the band, especially to Aaron, whose young daughter has Cystic Fibrosis.

“That first moment when you hear the words Cystic Fibrosis, when you find out about the CF world, I felt completely numb,” Aaron says. “I didn’t understand anything. And that was the thing that made me think, ‘Our relationship with Christ has to be based on something so much deeper than what we feel because we can feel emotionally bipolar at times…’ ‘Each Day’ declares that even in the middle of chaos, we can still hold on to the promises and God will never leave us alone.”

In these and all the tracks on Worship & Justice, Bluetree is committed to pouring everything—their lives, their travels, their music—into building up the church for the glory of God. “Coming from Belfast and playing in the local church, having the ability to travel, my eyes have been opened to how transient and fluid worship is,” Aaron says. “There are massive sacrifices and massive rewards when we all buy in, and it genuinely never stops.”

As God continues to open desperate doors, as with those in Cambodia’s child brothels recently shown in the band’s “Shine” video, this band is determined to walk through. “You can be among the most hideous paedophiles, in the middle of an active crime scene, but when you help people lift up truth over their lives, it is a complete joy and honour,” Aaron says. “It has little to do with us, and that’s the beauty of it.”

This is just a default widget. It'll disappear as soon as you add your own widgets on the Widgets admin page.